The US economy has been growing for a decade, with the economic expansion officially turning 10 in June 2019.

If growth continues into July, it will make this the longest expansion in U.S. history (at least since the 1850’s, as far back as economists have attempted to measure business cycles). While the immediate fears of a looming recession have been quieted, the sluggish growth of the current expansion does not have people passing out slices of birthday cake to celebrate, either.

In light of this milestone, the following analysis checks in with the health of the economic expansion, identifies current events to watch, and provides an overview of how the Orlando labor market is performing in a national context.

Not All Expansions Are Created Equal

Until now, the longest economic expansion on record took place between 1991 and 2001, 120 months. During that time the economy expanded by 43 percent. This past decade, the U.S. economy has grown only half that amount at 22 percent. According to Bloomberg Businessweek, at this current pace the economy would need to continue to grow for another six years to match the same growth seen during the 1990s.

The question on everyone’s minds is: why has growth been so sluggish? As NPR’s podcast The Indicator points out, the prime-age employment rate (the rate of people age 25 to 54 who are working) has still not recovered from the recession; it currently sits at 79.7 percent, compared to a high of 80.0 percent in January 2008 and low of 74.8 in Dec 2009. The American personal savings rate is also currently 6.2 percent, twice as high as it was pre-recession, signaling that people are being more cautious with their dollars. In his May 2019 U.S. Forecast, Dr. Sean Snaith, Director of the Institute of Economic Forecasting at the University of Central Florida, points out that “since the mid-2000s, productivity has been in a bit of a slump in the US, and this has been both a source of concern and a puzzle for economists.”

A few different theories have been suggested to explain the lackluster Gross Domestic Product (GDP) growth over the last decade. One is that the fewer prime age workers in the labor force and an increase in personal savings has led to decreased consumer spending. At the same time, personal spending as a percentage of GDP has been inflated beyond pre-recession levels for most of the last decade, creating a squeeze on both sides of the GDP pie. Consumers have been responsible for a larger and larger share of GDP (instead of business investment, government spending, and net exports) while also squirreling away more of their dollars or being left out of the labor force altogether.

On the other hand, GDP has been up so far for 2019, still crawling out of the decrease in growth that the country saw during 2015 and 2016.  Adding to the optimism, the monthly jobs report from the Bureau of Labor Statistics (BLS) shows that the U.S. economy continues to add jobs in a tight labor market, although fewer than expected (+75,000 in May), and the unemployment rate remains unchanged at 3.6 percent, the lowest it has been in 50 years. The pick-up in growth in 2019 suggests that there is still room in the market for hiring, wage growth, and engaging more individuals in the labor force.

Overall, these competing dynamics suggest that the economic expansion has lasted so long precisely because it has been a slow-moving train. There is no shortage of interest in that train ride continuing, including the Federal Reserve which can be expected to lower rates at any reading suggesting friction on the tracks.

Dr. Dale Brill, Senior Vice President of Research and the Foundation for Orlando’s Future at the Orlando Economic Partnership

Items to Watch Over the Next Quarter:

Regional Overview: How Has the Orlando Labor Market Performed?

Preliminary job numbers for May showed that Orlando’s unemployment remained extremely low at 2.8 percent. The region added 40,600 jobs between May of 2018 and 2019. However, month-to-month numbers show the Orlando MSA (the four-county region of Lake, Orange, Osceola, and Seminole county) lost 5,800 net jobs since April. This comes after a month of minimal growth between March and April, following a trend seen at the state level. Large month-to-month job decreases in professional, scientific and technical services (-2,100), education and health services (-2,000), government employment (-1,400) and construction (-1,300) accounted for most job declines. These categories were partially offset by month-over-month gains in administrative support and waste services (+2,100) and leisure and hospitality (+900).

Year-over-year numbers are still showing strong growth in almost all categories, however, with manufacturing and professional and business services remaining as Orlando’s two fastest growing industries, growing upwards of six percent since May of 2018. Employment data for June will be released by the Florida Department of Economic Opportunity on July 19th and will hopefully reveal whether monthly job declines were a blip on the screen or part of a larger, emerging trend.

Explore job gains and losses for the past month and year in the chart below. The monthly jobs report for the state and Orlando can be found here.

Regional rankings and events of note that have taken place during the second quarter of 2019 include: 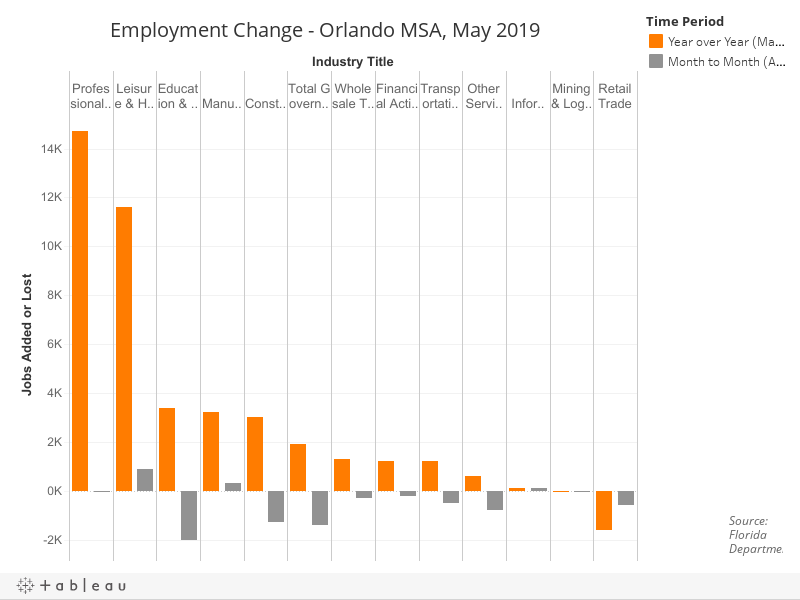